Made in America – Cars 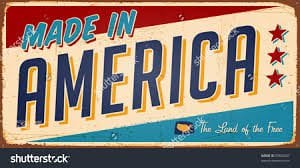 American Made products so American’s and

Cars Made in America

Cadillac ATS-GM, About a third of its body, chassis, and electrical components.

Ford Taurus-GM, losing the full 17.5 on its foreign-sourced body and electrical parts as well as its chassis.

Ford F-150-headquarters in Dearborn, MI, About one third of the F-150’s body, chassis, and electrical gear comes from outside the U.S.,

Ford Explorer-headquarters in Dearborn, MI, interior and body parts that come from outside the U.S.

Ford Expedition-headquarters in Dearborn, MI, About one third of its body and chassis components come from overseas.

GMC Canyon-Everything except some body, interior, and electrical parts is done in U.S.

Chevy Express- Express does not have a transmission made in the U.S.

GMC Acadia-Acadia, the SUV had everything American going for it other than 25% of its body, electrical, interior, and chassis components.

Chevrolet Traverse-Losing 12.5 point on the foreign elements of its chassis, interior, and electrical components.

Cadillac CTS-87.5 score on the Made in America Auto Index.

Buick Enclave-Enclave’s foreign-sourced elements in the body and chassis.

Chevrolet Corvette-Everything about the Corvette is American except one-third of its body, chassis, and interior parts.