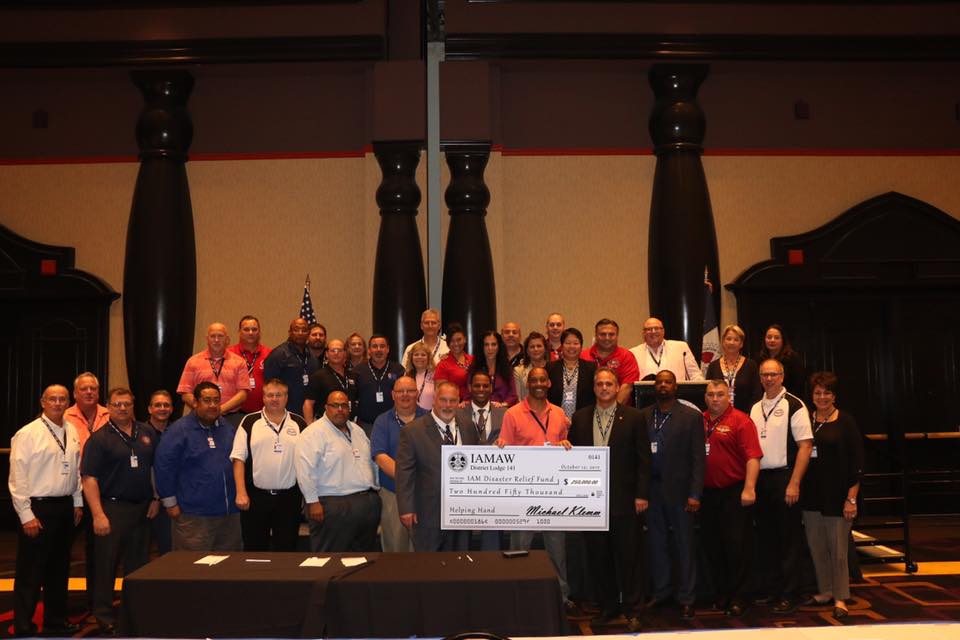 IAM141 President Mike Klemm presented a check for $250,000 to the IAM Disaster Relief Fund, the largest single donation in the history of the program.

The District Lodge 141 Executive Board made and approved the motion to donate $250,000 to the IAM Disaster Relief Fund. The record-shattering contribution was announced on the opening day of the IAM141 Chairman’s Conference in Las Vegas, Nevada.

The historic donation was raised in order to address ongoing and massive flooding and storm damage caused by Hurricanes Harvey in East Texas, Irma in Florida and Maria in Puerto Rico.

The sheer magnitude of the damage caused by the 2017 hurricane season has strained all major disaster relief and aid programs in the United States. The IAM Disaster Relief Fund was also under unprecedented pressure. So many IAM members have been impacted by natural disasters in 2017 that the program was in danger of being unable to respond to future catastrophes.

In response, the IAM141 Executive Board passed a motion to replenish the fund, a measure that passed with overwhelming backing from District leadership. The new financial support will help the program continue to provide disaster-affected members with the money to buy meals, pay basic bills or make critical repairs to their homes and vehicles.

“It may not seem like a lot to some people,” said Transportation General Vice President Sito Pantoja, “but for a person that has lost everything, they need that check. That means the world to them”

IAM International President Robert Martinez hailed the donation at the IAM141 Chairpersons Conference. “We’ve witnessed over the past few months how the Fighting Machinists are always there for one another. And we just saw an example of this, “said International IAM President Robert Martinez. “When our membership and this District made the largest contribution to the Disaster Relief Fund in its history.”

The IAM Disaster Relief Fund has helped hundreds of members recover from disasters associated with the recent hurricanes. In Houston alone, more than 400 checks have been delivered to families in need.